Photo: Anushka Sharma has the sweetest birthday wish for Shahid Kapoor: Have the best one

0
SHARES
28
VIEWS
Share on FacebookShare on Twitter
Anushka Sharma joined the bandwagon of celebrities wishing Shahid Kapoor on social media on the occasion of his birthday today. The actress shared a dapper picture of the actor along with a sweet message. 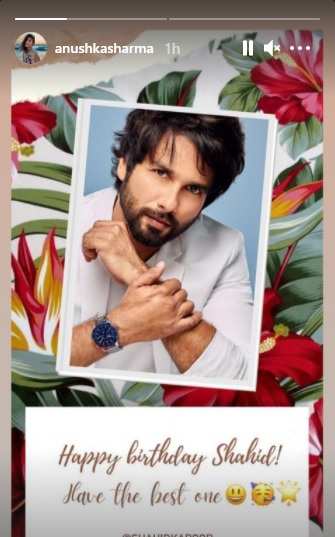 Captioning the picture, she wrote, ‘Happy birthday Shahid! Have the best one’ Anushka and Shahid have worked together in ‘Badmaash Company’. Directed by Parmeet Sethi, the movie also starred Vir Das and Meiyang Chang in key roles.

Meanwhile, Anushka has recently given birth to her first child with Virat Kohli. The couple has named their daughter Vamika.

On the work front, Shahid will next be seen in the Hindi remake of the Telugu film, ‘Jersey’ where he will be seen essaying the role of a cricketer. The movie also stars Mrunal Thakur and Pankaj Kapur in key roles.

Anushka, on the other hand, was last seen in Aanand L Rai’s ‘Zero’ co-starring Shah Rukh Khan and Katrina Kaif in the lead roles