0
SHARES
9
VIEWS
Share on FacebookShare on Twitter
Actress Khushbu is a multifaceted personality who is a producer, actress and politician among others. The actress whose next movie is Annatthe with Rajinikanth is celebrating her wedding day. She married director and actor Sundar C on March 9, 2000 and she has posted some adorable photos with an interesting caption.
Khushbu tweeted “They didn’t give us a year, but then here we are!! 21yrs n still going strong. A perfect blend of the north n the south. We prove ‘opposites attract’. This day,that Year! 09/03/2000 #Milleniumcouple #Happyweddinganniversary #21st mmmuuuaaahhhhh❤❤?????????????????? Love you.” 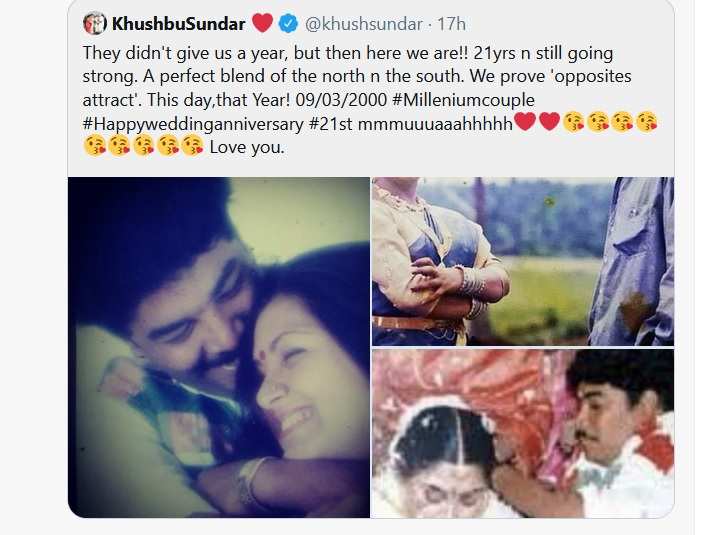 She also posted photos with Sundar’s mother and wrote, “The King with his Queen. And we with our Empress. The beet way to start your celebration is by taking the blessings of the elders at home. And who can be better than the one who has raised such a fine man. #21stweddinganniversary.”

enjoying as the leading heroine and hence they waited for the right time to come. They fell in love on the set os Murai Maaman which released in 1995 but got married in 2000.

Here is wishing the adorable couple many more years of togetherness!