0
SHARES
53
VIEWS
Share on FacebookShare on Twitter
Like mother, like daughter. The video of Nithya Das and her daughter who look identical is now rending on social media. Her daughter Naina looks exactly like her. The blue eyed girl of Mollywood had grabbed the minds of Malayalis through her performance in Ee Parakkum Thalika. The film directed by Thaha and released in 2001 is still a favourite of many Malayalais. Nithya Das, who was on a break from films after marriage, had later returned to small screen. She is now very active on TV industry. A dance that she performed along with her daughter was noted by netizens. She is married to Aravind Sigh and have two children. Her popular films include Balettan, Choonda, Hridayathil Sookshikkan, Nagaram, Soorya Kireedam and Nariman. 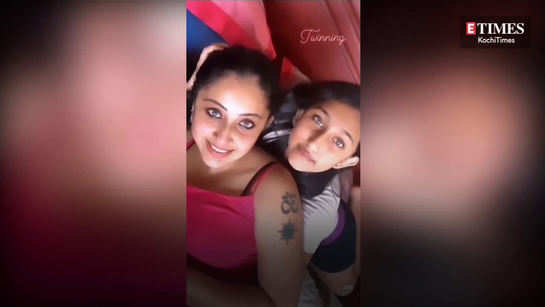 Her performance as the nomad Basanthi is still popular among Malayalis even after two decades. Nithya came into films after actress Manju Warrier noticing her photograph in a magazine. According to Nithya, Manju suggested her name to the crew of Ee Parakkum Thalika. After acting in many films, she got married to Arvind Singh Jamwal, a flight steward.

Nithya had earlier told us that her family loves traveling. She also said that her daughter, whom she fondly calls Nunu is very adventurous and is comfortable going for trekking even at 5 am, for more than five km. They have visited places like Rajasthan and Wayanad. One of her most memorable journeys was the one to Walt Disney World, Orlando. Recently they had travelled to Punjab and the videos were up on social media.