Disha Patani extends Eid wishes and thanks the audience for showering love on ‘Radhe: Your Most Wanted Bhai’

0
SHARES
12
VIEWS
Share on FacebookShare on Twitter
Salman Khan and Disha Patani starrer ‘Radhe: Your Most Wanted Bhai’ released on the occasion of Eid. Their fans are quite excited to watch them together after ‘Bharat’. The film has been receiving immense love from the fans.

Disha took to social media and thanked the fans for loving the film. She also extended Eid wishes to her Instagram family. Sharing a note on her Instagram story, Disha wrote, “Eid Mubarak everyone, hope everyone’s safe and healthy. Thank you so much for showering your love on Radhe✨✨” Have a look: 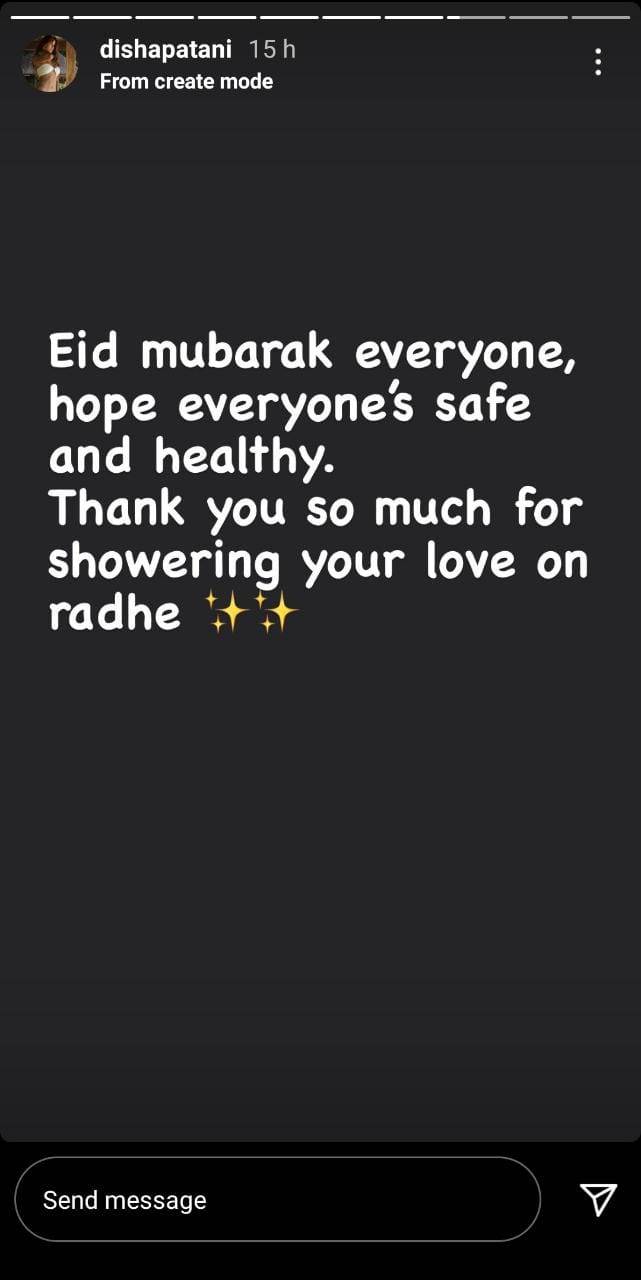 Recently, in an interaction with ETimes, Disha spoke about film’s OTT release. She said, “I feel like it is a blessing to have a release after a year, whether it is arriving on OTT or theatre or any other platform. I hope that it reaches as many people as possible and entertains them all, especially at a time like this. We really need that.”

She also spoke about working with such talented bunch of actors in the film. She added, “It has been such a delight to work with everyone, Salman sir, Prabhu sir, Jackie sir, Randeep. I get to learn so much from each actor, because they are all so different from each other and the kind of roles they have done. So it was a pleasure! Even Prabhu sir as a director, he is so helpful because he knows exactly what he wants and he shows you as well. He is a great actor, so it just gets very easy.”

On the work front, Disha will be next seen in ‘Ek Villain 2’ with John Abraham, Arjun Kapoor and Tara Sutaria.

At 88 kilos, Sameera Reddy is sweating it out to achieve her Diwali goal of a ‘fit body’

At 88 kilos, Sameera Reddy is sweating it out to achieve her Diwali goal of a ‘fit body’