0
SHARES
8
VIEWS
Share on FacebookShare on Twitter
The young and pretty actress Gouri Kishan made an impression as the young Jaanu in her debut film ’96’ starring Vijay Sethupathi and Trisha in the lead. The talented actress who was recently seen in Dhanush starred ‘Karnan’ has shared about her traumatic experience at school.

In the light of recent events that was exposed about a teacher in a popular school in Chennai, the young actress has shared a long note in which she shares about her experience at her school.

Urging others to come out and share their story, Gouri Kishan posted, “Revisiting memories are thought to be nostalgic, but not so much when it’s about childhood trauma. In the formative years that we spend in school, it pains me to think of the number of students like myself who have been put through so much agony! Schools are supposed to be a nurturing ground for a student, not a place you fear of being labelled and branded for your worth.”

“In light of the recent expose on PSBB for harassment and misconduct, I’d like to put forward that my schooling in Hindu Senior Secondary, Adyar was hugely problematic too! After speaking to several of my schoolmates about the same, we’ve all come to a collective realization that there was a great deal of ingrained normalising that had taken place in the school environment.” 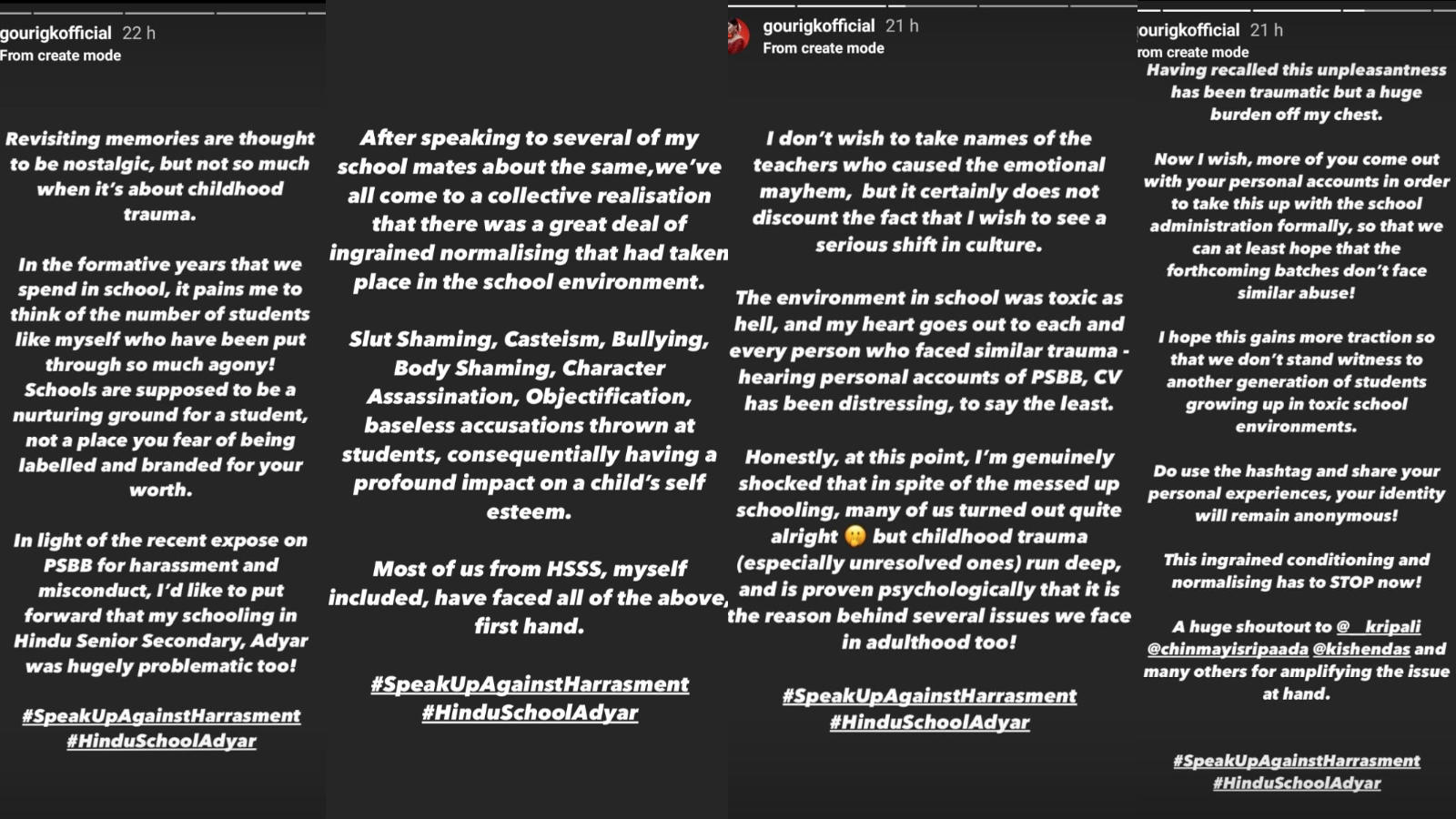 “Slut shaming, Casteism, Bullying, Body Shaming, Character Assasination, Objectification, baseless accusations thrown at students, consequentially having a profound impact on a child’s self esteem. Most of us from HSSS, myself included, have faced all of the above, first hand.”

“I don’t wish to take names of teachers who caused the emotional mayhem, but it certainly does not discount the fact that I wish to see a serious shift in culture. The environment in school was toxic as hell, and my heart goes out to each and every person who faced similar trauma – hearing personal accounts of PSBB, CV, has been distressing, to say the least.”

“Honestly, at this point, I’m genuinely shocked that in spite of the messed up schooling, many of turned out quite alright but childhood trauma (especially unresolved ones) run deep, and is proven psychologically that it is the reason behind several issues we face in adulthood too.”

“Having recalled this unpleasantness has been traumatic but a huge burden off my chest. Now I wish, more of you come out with your personal accounts in order to take this up with the school administration formally, so that we can atleast hope that the forthcoming batches don’t face similar abuse!”

“I hope this gains more traction so that we don’t stand witness to another generation of students growing up in toxic school environments. Do use the hashtag and share your personal experiences, your identity will remain anonymous! This ingrained conditioning and normalising has to STOP now!”