Jackie Shroff: The day Salman Khan calls me ‘Mr Shroff’, I will know that our equation has changed

0
SHARES
2
VIEWS
Share on FacebookShare on Twitter
Jaggu dada, as he is lovingly called by his fans and most people in the industry, is an actor who even after almost four decades in the industry enjoys immense popularity. From playing the quintessential Bollywood hero to making a smooth transition to strong supporting roles, his is a success story worth writing about. Jackie Shroff, aka ‘Bhidu’, was recently seen in the Bollywood potboiler
‘Radhe: Your Most Wanted Bhai’. The film that saw a digital release in India on May 13, was screened in theatres in over 40 countries. In a chat with BT, he talks about social media, staying relevant, and of course, Salman Khan, among other things. Excerpts:

You’ve been seen in films like with Salman Khan since the 90s, and you continue to share a good rapport with him. Your bond with him goes back to a time long before he stepped into Bollywood. Tell us something about those times.

I have known him as a model and then as an assistant director, who handled my clothes and boots when I was shooting for ‘Falak’ (1988). He used to look up to me and is like my little brother. When he was an AD, I used to show his photographs to the producers I was working with. Finally, KC Bokadia’s brother-in-law gave him a break in Bollywood. It was
‘Maine Pyar Kiya’ (1989) that catapulted him to stardom, but I feel that I was instrumental in him getting a break in the industry.
Toh aise dosti shuru hui… well,
dosti itni nahi hai ki we are very close, but he keeps coming up with films,
aur jab bhi kuchh bada aata hai toh he thinks of me first. This time around, he came up with an action-comedy like ‘Radhe…’, which is directed by Prabhudeva. Comedy is something I have stayed away from, maybe because the writers didn’t think I was comical enough. When I learnt that Prabhudeva wanted to cast me in his film, it took me back to the time when he had choreographed a song for me in ‘Gardish’ (1993). Prabhudeva was also my co-actor in ‘Agni Varsha’ (2002). So, he has worked with me as a dance director, co-actor and then, I saw his film, ‘Wanted’ (2008). So, I thought that if this guy has offered me a role, I should do it…because a man who can make me dance, can also make me do comedy (laughs!). 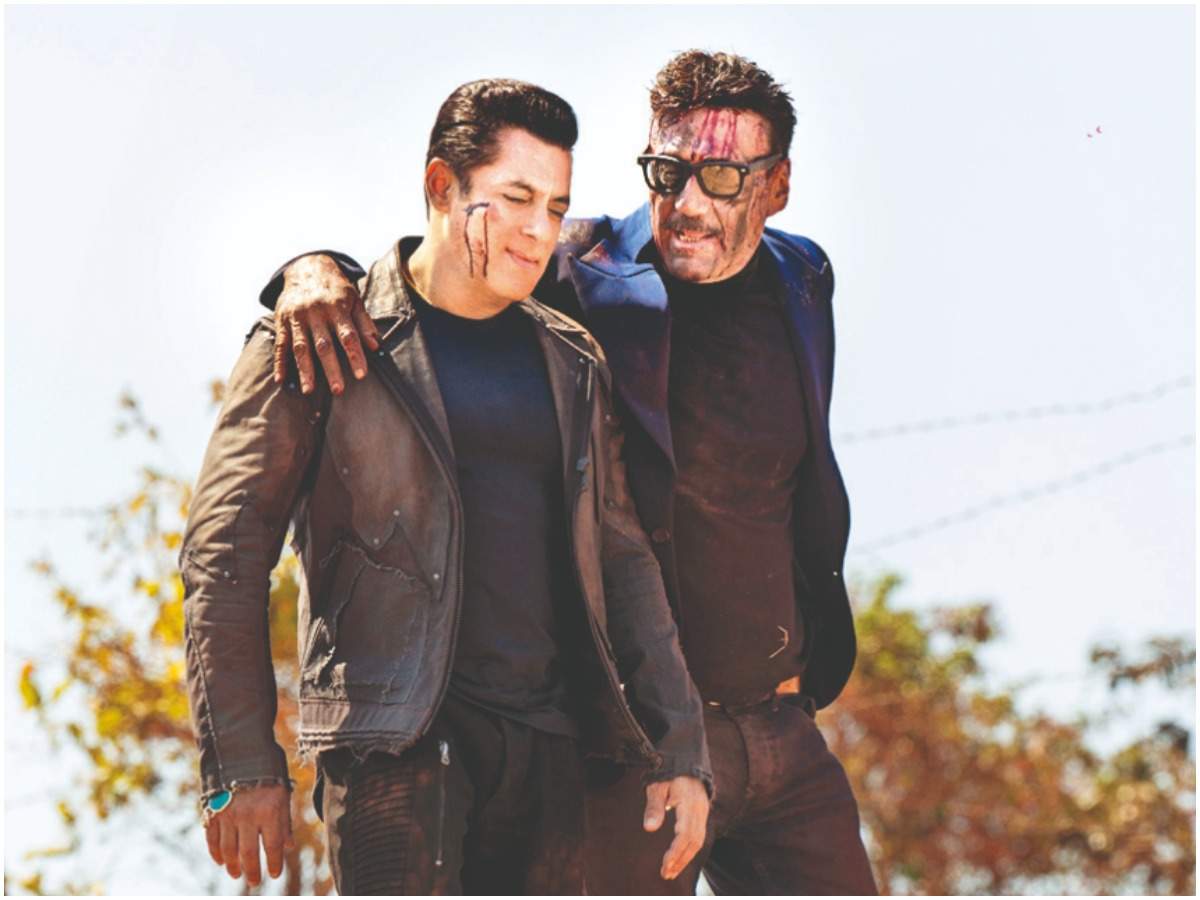 From being an AD to being one of the biggest stars in the country, Salman has indeed come a long way. Personally, what changes you have observed in him over the decades?

None, both of us are still the same.
Main aaj bhi daal, chaawal aur ghee khaata hoon.
Uska bhi apna ek pattern
hai, wohi karta hai.
Insaan basically
badalta nahi hai. I don’t think he has changed. We continue to call each other Jaggu and Sallu. The day he calls me ‘Mr Shroff’, I will know that our equation has changed.

You have always followed your heart when it comes to signing a film. But, has that process undergone a change with time and experience?

I have done films for my friends, for money or because of the banner. Sometimes, if a camera assistant or an assistant director comes up with a script and says that I could make a difference to their film, I give my nod. There have been times when there was no money involved, and there have also been many instances when the role prompted me to take up a project. But, I could never say ‘no’ to anybody. Also, I look at a film as a table or chair. A chair has four legs, and if I am one of the four holding it up, it’s more than enough for me. Subhash (Ghai) ji had told me in the beginning that it’s always the strength of the role that matters, not its length. A strong character is the spine of a film. It also helps that I am in touch with reality. There was a phase when I would sing ‘Goriya Re Goriya Re’ as a hero and this, too, is a phase. I kept going with the flow and never complained, ‘Now, they are not giving me a song, or I have got just one song’. I know that I don’t have to sing or dance to be noticed.

Even if you are not doing as many films as you did in the 80s and 90s, you have a huge fan following and are considered a fashion icon. Has the fact that you have always had this special connection with the masses, helped you stay relevant?

I am very receptive, and that’s courtesy of my background and upbringing. Bade bade gharon ke drivers ke bachhe mere dost hote the, aur bade seth ke bachche bhi mere dost hain. We would all play together. During my growing-up years in the chawl,
main neeche se neeche bhi dekh liya aur oopar se oopar bhi dekh liya. Human beings are all the same, only their labels differ. Bas maine label ko dekha hi nahi aur na mujhe dikha. It’s all about adjusting yourself, being respectful, and receptive. Treat a human as a human. Talking about staying relevant, I have kept my eyes open, and I feel that my heart is still young. I feel like a teenager even at this age. I try to learn from the current generation instead of saying, ‘Apne time par alag tha’. Aaj bhi apna time hai aur kal bhi rahega. One should blend like water with every colour that life offers.

Do you feel that there could be more films made for actors of your age, who still have so much to do and are raring
to go?

Well, the legendary Bachchan saab still keeps playing such characters, which is inspiring for artistes like me. In today’s films, actors of my generation may not be singing or having as much screen time, but that doesn’t mean that their role is not integral to the plot. Chunni Babu in ‘Devdas’ (2002) was rejected by a few actors, because Shah Rukh Khan was playing the title role, but that didn’t bother me.

After opening up about her battle with endometriosis, The Kapil Sharma Show fame Sumona Chakravarti says, ‘She’s doing okay’

Raveena Tandon: Missing a bit of the red lipstick action

Raveena Tandon: Missing a bit of the red lipstick action