0
SHARES
6
VIEWS
Share on FacebookShare on Twitter
While B-Town celebs continue to revisit fond memories of late actor Sushant Singh Rajput on his death anniversary today, Priyanka Chopra becomes the latest to join the social bandwagon. Sharing a monochrome picture of the late actor, the global icon wrote, “Thinking of you #SushantSinghRajput”. 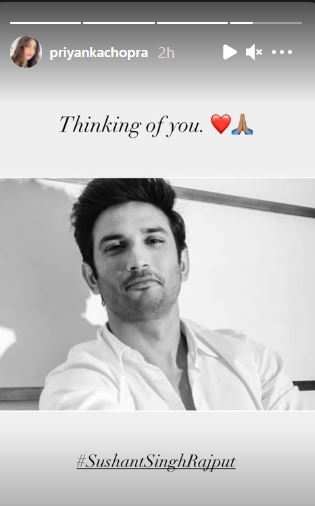 Meanwhile, Preity Zinta has also penned down an emotional post for SSR with a throwback picture of the two. Hoping for the late actor’s peace, she captioned it, “Death leaves a heartache no one can heal, love leaves a memory no one can steal ❤️ Hope you are at peace wherever you are. #RIP #Missyou #throwback.”


On the other hand, Sushant’s ‘Raabta’ co-star Kriti Sanon has put up a collage of throwback picture with Sushant and poured her heart out for the late actor. “The first time i ever shot with you.. Our look test..2 complete strangers, meant to cross each other’s path, For a film that spoke of inexplainable connection, Based in two worlds… Today, it feels so painfully weird to know That You and I are not in the same world anymore.. Still feels like it hasn’t happened for real. Like maybe you are still around and I’ll bump into you somewhere..” she said.

Kriti further added in the post, “I don’t think it’ll EVER sink in.. But i pray that you are happy and at peace whichever world you are in.. ❤️ #sush Thanks @anaitashroffadajania for sharing this collage.. brought back a lot of memories.. ❤️”

Sushant’s ex-girlfriend and actor Ankita Lokhande has also shared several throwback pictures of Sushant on her Instagram story. These pictures mostly feature SSR with his friends, family and Ankita in few.

Sushant Singh Rajput left for his heavenly abode on 14th June last year. He was found dead at his Bandra apartment.

Aamir Khan: ‘Lagaan’ has shaped me in so many ways

Vardhan Puri shares memories of Sushant Singh Rajput from the sets of ‘Shuddh Desi Romance’: He wasn’t ever sitting idle

Vardhan Puri shares memories of Sushant Singh Rajput from the sets of ‘Shuddh Desi Romance’: He wasn’t ever sitting idle