Confirmed: Sivakarthikeyan to team up with Gautham Menon

0
SHARES
2
VIEWS
Share on FacebookShare on Twitter
We had recently reported that actor Sivakarthikeyan is all set to team up with Gautham Menon. Reports were that Sivakarthikeyan and Gautham Menon had an initial discussion to collaborate on a project, and the actor was impressed by the story told by the director. The film is said to be produced by Vels Film International and might kick start next year.

While the actor’s side had denied any such developments, looks it is true and look who seems to have have given an official confirmation of sorts on the project. While an official announcement is yet to be made, looks like Preethaa Ganesh, the Vice President of Vels Group of Institutions, has taken to her Insta story and confirmed the same news. She had shared one of the instagram posts saying, “Sivakartikeyan and director GVM to join together for a new movie and the movie to be produced by Vels Films.” (sic) 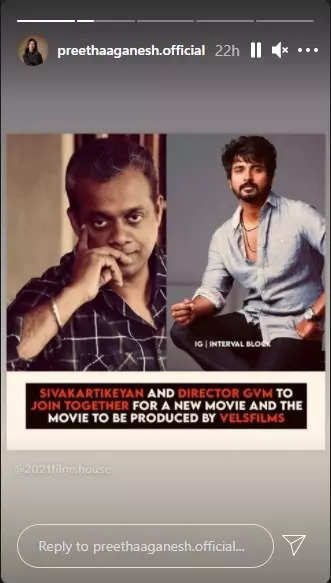 Raai Laxmi and her ‘unforgettable experience’ at the Ajmer dargah

Raai Laxmi and her 'unforgettable experience' at the Ajmer dargah