0
SHARES
3
VIEWS
Share on FacebookShare on Twitter
Parineeti Chopra conducted an ‘Ask Me Session’ on her Instagram handle on Tuesday afternoon. The actress seemed to be in a chatty mood as she answered a lot of fan questions in the most fun way. One of the fans also questioned her about her co-star Ranveer Singh and it is simply unmissable!

One of the fans asked Parineeti, “Ranveer Singh papa ban gaye” To this, the actress tagged Ranveer and asked him to confirm. She wrote, “Please confirm @ranveersingh” Have a look: 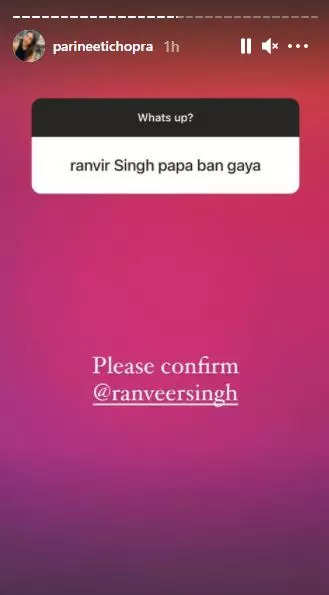 Another fan told her that she looks like Shraddha Kapoor. The fan wrote, “You and Shraddha Kapoor look like sisters!” to which Parineeti replied, “What?! Shraddhu I’m replacing Sid” and tagged the brother-sister duo. Have a look: 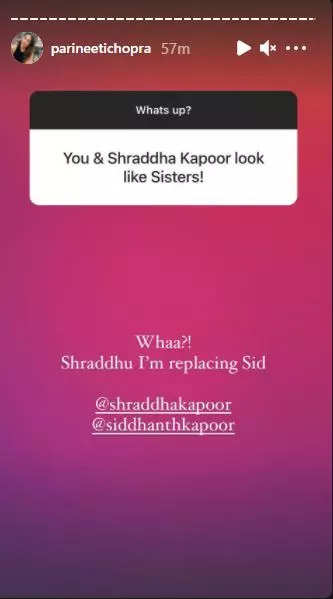 Meanwhile, Parineeti recently penned a heartfelt note for her brothers on the occasion of Raksha Bandhan. She shared childhood pictures and wrote, “My rakhi post as late as their rakhi gifts. Where dem at?!

@thisissahajchopra @shivangchopra99 [Yes, I see my haircut. Answers in my stories]” To this, her brother replied, “My rakhi gift to you is my lovely presence in your life. @parineetichopra


Recently, Parineeti spoke about choosing her characters. She told BT, “When I signed Saina, I thought I had to do just two things — play badminton and act. There were two clear sections, both of which I thought I could pull off. I knew basic badminton, and I’ve been an actress for a few years. But my approach towards my work changed while I was working on the remake of TGOTT. People think that I am this happy and exuberant girl all the time. I have to burst that bubble and say that I am not that girl, and the person that I played in some of my previous films was not me. I want the audience to know that I am no longer going to play that girl on the screen or even off it. My films this year brought me back to my roots and the person that I was.”

On the work front, Parineeti will be next seen in ‘Animal’ with Ranbir Kapoor and Anil Kapoor.

Ananya Panday’s latest post is all about self love