0
SHARES
9
VIEWS
Share on FacebookShare on Twitter
Shahid Kapoor’s 2019 film, ‘Kabir Singh‘ was a super hit at the box office. Helmed by Sandeep Reddy Vanga, the film also starred Kiara Advani. He essayed the role of an angry young man with an addiction to alcohol after losing the love of his life. A lot of debate took place in the industry when the film hit the theatres. Recently, Shahid’s wife Mira Rajput conducted an ‘Ask Me Anything‘ session on Instagram.

During her chat, a fan wrote ‘Kabir Singh Zindabad’ To which, the star wife replied, “Usse Anulom Vilom Ki Zaroorat Hai. Shant Rahega.” Anulom Vilom, a branch of yoga. It is practised as a form of meditation to attain mental peace, manage stress, anxiety and anger management.

Check out her response here: 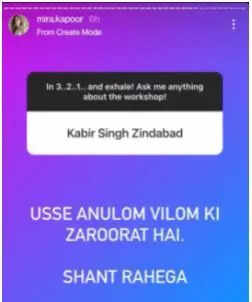 A few days back, Shahid celebrated 12 years of ‘Kaminey’. “12 years ago this film allowed me to express myself as an actor. Not a face…not that cute boy next door…not that done to death –I’m such a sweet guy good guy please like me– rubbish. My first double role. My first shot at a kamina no holds barred; A straight out performing part. This was when it all started. So this one will always remain special…#12YearsOfKaminey”, he wrote as he shared an illustration.

On the work front, Shahid wrapped up shooting for another Telugu remake titled ‘Jersey’. The film will also star Mrunal Thakur alongside Pankaj Kapur and Pankaj Tripathi. He is busy shooting for his debut web series that stars Raashii Khanna and Vijay Sethupathi.

Sanjay Kapoor remembers Rajiv Kapoor on his birth anniversary; says ‘Still can’t believe that we didn’t speak at sharp 12 in the night’

Sanjay Kapoor remembers Rajiv Kapoor on his birth anniversary; says 'Still can’t believe that we didn’t speak at sharp 12 in the night'