0
SHARES
1
VIEWS
Share on FacebookShare on Twitter
It is known that the team of Mani Ratnam‘s magnum opus, ‘Ponniyin Selvan‘ has now moved to Madhya Pradesh for the ongoing schedule of its shooting. It was only two days ago that Prakash Raj had shared a pic of himself at the Gwalior airport with Karthi and Mani Ratnam, saying they were heading to Orchha for the shoot. Prakash Raj had joined the team for the shooting only a few days after he completed a surgery after he suffered a fracture. Now, it looks like the shooting is progressing briskly in Orchha and Trisha, who also plays a prominent role in the film, shares a pic of the Orchha temple from the shooting spot of the film. The massive temple and a camera shooting a scene is seen in her pic that she shared on social media. 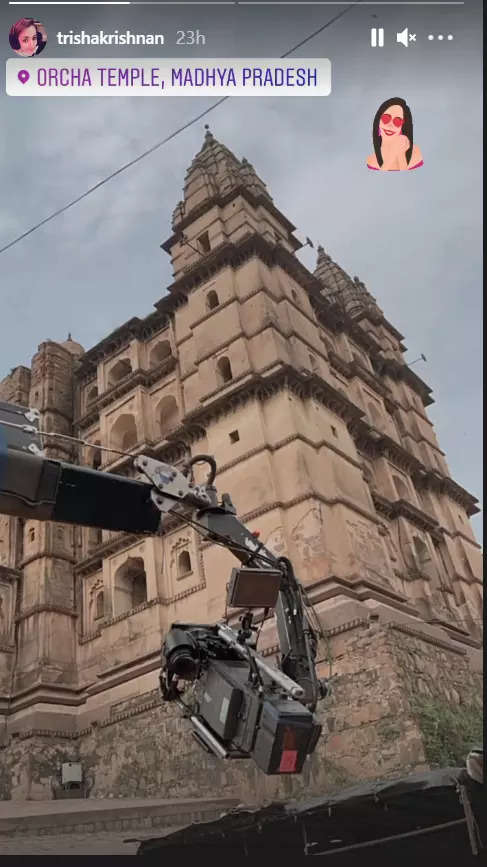 Before the team moved to Madhya Pradesh for the shoot, they were shooting in Pondicherry. Ever since movie shootings were permitted after the second wave of coronavirus relented, ‘Ponniyin Selvan’ shooting schedules have been going on at a brisk pace. The historical drama has a huge star cast and is based on the novel by Kalki Krishnamurthy. The film’s music is scored by AR Rahman and produced by Madras Talkies in association with Lyca Productions.

The truth about Amal Neerad’s film with Kamal Haasan & Suriya