Wonder what Kareena Kapoor Khan is ‘waiting’ for this Wednesday

0
SHARES
4
VIEWS
Share on FacebookShare on Twitter
Bollywood’s style icon Kareena Kapoor Khan seems to have something special planned for today as she took to her Instagram story and shared a glimpse of her Wednesday glam-up look. In the picture, she is seen donning a white tee with complimenting makeup. Her outfit is also twinning with her freshly painted white nails.

Posing for the perfect selfie, Bebo further revealed in the caption of the picture that she is ‘waiting’ and we are wondering what is in her mind! 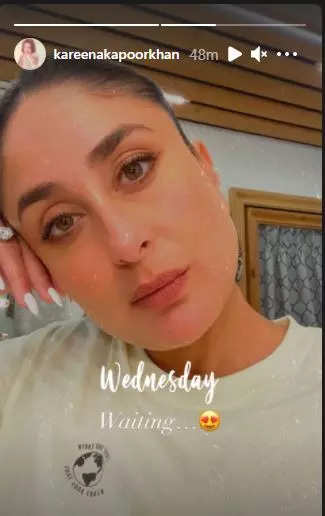 Kareena who was previously holidaying in the Maldives with her husband Saif, and their songs, Taimur and Jehangir, has now returned back to Mumbai. Today she was spotted out and about in the city with her younger son Jeh as both enjoyed walking near their residence in Bandra.

Captured by shutterbugs, Bebo had donned a floral dress with her hair tied in a neat ponytail. While she glowed in her no-makeup look, Jeh, on the other hand, stole the limelight in a cute blue coloured onesie with a bib around his neck. In one of the pictures, the actress was also seen holding Jeh and planting a sweet kiss on his head.


On the work front, Kareena will be next seen in Aamir Khan’s upcoming film ‘Laal Singh Chaddha’. Apart from this, she is also a part of Karan Johar’s multi-starrer ‘Takht’, which has been reportedly shelved for now.

Inside pics! Mira Rajput shares glimpses of Misha’s birthday decor and it is all things colourful

Inside pics! Mira Rajput shares glimpses of Misha's birthday decor and it is all things colourful